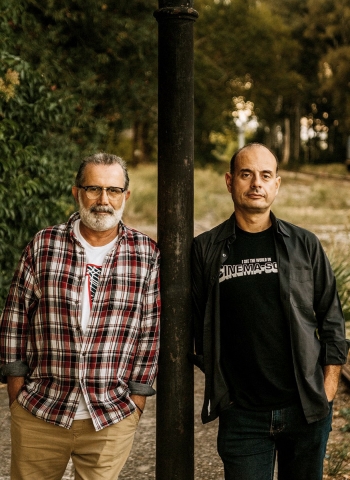 We are Kostas and Aris. Humble visual storytellers. Although we come from very different backgrounds, we share a common everlasting passion and knowledge for photography and motion pictures, as well as for vintage lenses, music and poetry. Kostas has a strong scientific and business background, having spent several years in the field of academic research and consequently working for the Stock Exchange. Aris has a sound experience in the field of journalism, as he has worked many years as Editor-in chief of several broadcasts for the Greek television.

When we became friends, a few years ago, we have decided to combine our common passions and our diversity in order to turn our lives around and to embark on this thrilling journey of visual storytelling. We feel that we have so many things to express straight from our hearts when telling a story, as we become an integral part of it. We believe that photography & cinematography are complementary arts, interlaced, and equally important to tell a story, especially in documentary work. Our pictures and films focus on people and sheer emotion. We aim at creating a precious visual legacy for the couple and their family, that will be kept alive throughout the years.

During the past five years we have been blessed to see our original approach to telling stories, not only getting so much love from the audience and from the protagonists themselves, but also, to obtain several prestigious awards and international recognition both in the fields of photography and of cinematography. So far, several of our wedding pictures, albums and films have been awarded with the highest prizes by specialized international organizations (WPPI, Inspiration Photographers and WPV to name a few). Recently, some of our wedding films have received top awards for their cinematography by important international film festivals that are not wedding related (ARFF Amsterdam, CICFF, Flying Robot San Francisco International Film Festivals, among others). We have also been nominated in the Top 20 Wedding Cinematographers worldwide by Inspiration Photographers in 2016. Having our work and artistic approach recognized by a broader, independent, audience is definitely a strong incentive to continue our efforts to tell stories the way we do.